So, just a bit further up Shelley Street is where one of Sammo Hung's friends lives, just opposite the entrance to the Jamia Mosque: the green archway with the pillars on the left of the capture.

Another big thanks to Phil (from the highly recommended Hong Kong (& Macau) Stuff / Oriental Sweetlips & Hong Kong (& Macau) Film Stuff blogs) for pinpointing this. As previously mentioned, there isn't a Street View for Shelley Street and there isn't an exact Panoramio pic, but there's a Picasa image which shows off the archway that leads up to the mosque (thanks to Yves Traynard). 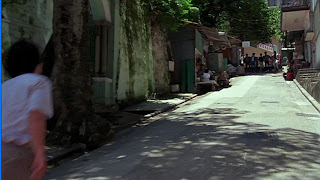 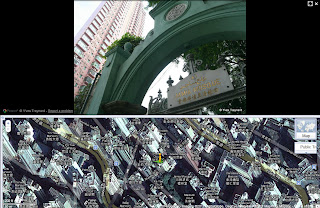 View on Google Maps
Posted by Daniel Thomas at 5:35 pm

Email ThisBlogThis!Share to TwitterShare to FacebookShare to Pinterest
Labels: Central, Heart Of Dragon, Sammo Hung, Shelley Street
Newer Post Older Post Home
Each spot is tagged by film, director, district and street(s). There's also an A-Z of films and a tag cloud below, as well as a place-mark for each location on a Google Map.