Now, as far as I can tell, Hoi Fai Road runs along the waterfront of Tai Kok Tsui and goes over some reclaimed land. Now, the spot where Sandra Ng goes to thank Alex Fong, as he heads off into hiding is just a bit further along from the spot I've marked, which Street View doesn't quite cover. Still, you can see the same cranes, breakwater walls and the topography of Hong Kong Island is a match too.

This area, next to the roundabout, is also where the Tai Kok Tsui Ferry Pier and Bus Terminus used to be, but this has since been replaced with the HSBC Centre. This spot is used for the confrontation between Sandra Ng and Kam Hing-Yin, later in the movie. 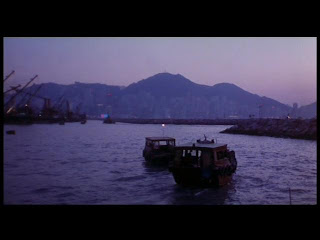 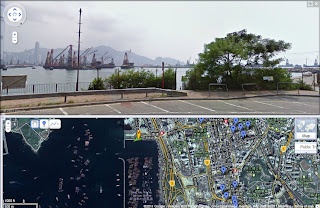 View on Google Maps
Posted by Daniel Thomas at 7:23 pm

Email ThisBlogThis!Share to TwitterShare to FacebookShare to Pinterest
Labels: Hoi Fai Road, Portland Street Blues, Raymond Yip, Yau Ma Tei
Newer Post Older Post Home
Each spot is tagged by film, director, district and street(s). There's also an A-Z of films and a tag cloud below, as well as a place-mark for each location on a Google Map.