So, this is the spot where Angela Mao is selling bottles of Coke, whilst keeping an eye on Takagi Joji. We think the chimney has since perished, but with this Panoramio pic, you can see that the hut is still there and the shoreline remains unchanged (thanks to Suzanna Chan). 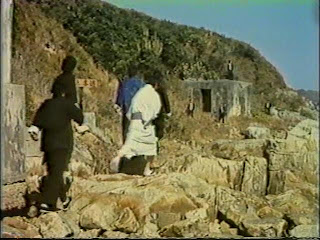 View on Google Maps
Posted by Daniel Thomas at 9:37 pm

Email ThisBlogThis!Share to TwitterShare to FacebookShare to Pinterest
Labels: Kau Sai Chau, Project A, Sai Kung, Stoner, Wong Fung
Newer Post Older Post Home
Each spot is tagged by film, director, district and street(s). There's also an A-Z of films and a tag cloud below, as well as a place-mark for each location on a Google Map.